See how quickly Genghis Khan expands his empire, the Mongolian Empire. In the video below the conquests of the Mongols are shown on the map in the period from 1195 to 1368. The Mongol Empire at its peak stretched from Eastern Europe and to the Sea of Japan.

This video is created by EmperorTigerstar

The Spark an Empire

“One day, I will rule all those lands I see today.” This should have been what little Temujin thought when He looked at the vast plains around Mongolia. His mother called him Temujin, but we know him as Genghis Khan, and this is how he carved out himself one of the biggest empires in mankind’s history.

How Mongols came under a one Banner?

Mongolia in the 11th century was occupied by 5 powerful tribal confederation and each contained many smaller tribes. Temujin understood that if he is to gain power and create an Empire, he must command the loyalty of all these tribes.

These tribes often waged wars on each other and Temujin saw this as an opportunity, a weakness he would then exploit for his own gain by making decisive alliances with his relative and family clans and slowly eliminated the rival chieftains, until all the remaining Mongol aristocrats accepted his dominion. He crowned himself as the “Genghis Khan” which means “the Great Ruler”.

Map of Mongol Empire at its height

Under Genghis and his successors, the empire grew from modern day Mongolian territory to occupy China, Central Asia, Persia and Iraq, a part of northern Africa and a portion of Eastern Europe. At its height, the empire stretched from Pacific seaboard to Eastern Europe, making it the second largest empire in the history. 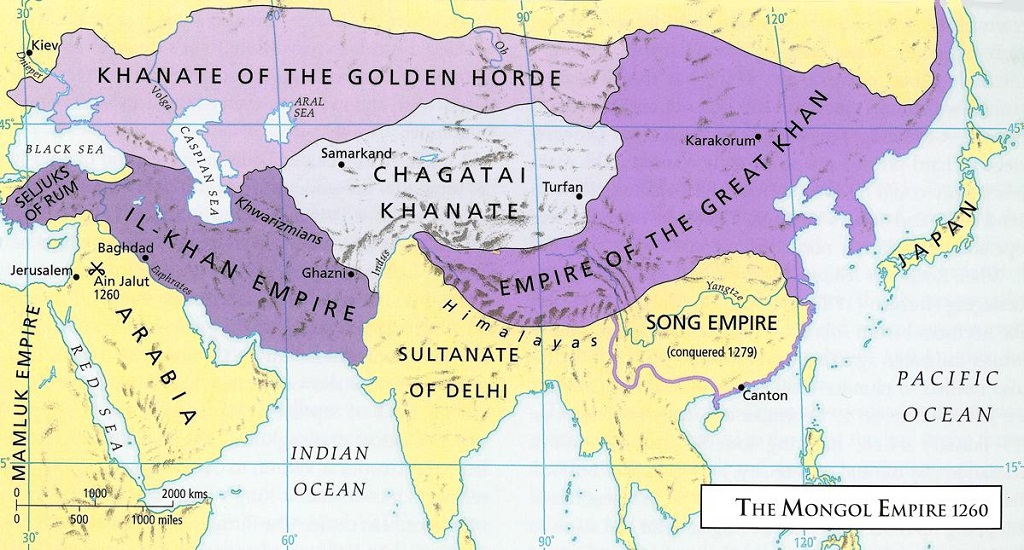 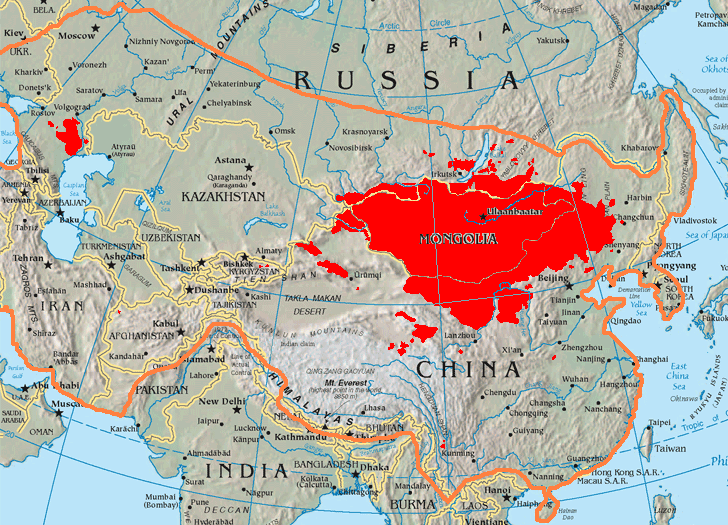 Why were the Mongols Successful?

Mongol empire came to prominence and expanded to its height at a rapid pace of nearly just 100 years, while other empires took centuries and lasted nearly two and half centuries. This is why:

Genghis introduced a Code of Law to the empire, “Yassa”; and it forbade,

li>Hunting animals during the breeding season

Also, the Mongols selected officials based on their Merits, Performance and Loyalty. Because of this, most of the official in the empire were in fact, not Mongols!

Religious and cultural freedom was also granted to the subjects of the empire as well and Mongol empire became one of the most multicultural empires in the history.

Furthermore, the empire had a relatively effective system of record keeping and the official in charge of this was called “Jarughachi”. Moreover, Genghis encouraged literacy, many public schools were started to provide education for children.

Military and the strategies

At its height Mongol army, the “Golden Horde” was approximately 105,000 – 115,000 strong. Mostly they employed cavalry, the lightly armored yet deadly mounted archers and their infantry men were relatively good as well. Also, Mongols employed people with different skills from occupied area, the best example is the recruitment of Chinese military engineers and Bombardiers.

Mongols are not renowned for their Naval Military prowess and most of the Naval Campaigns they launched against Japan met with a disastrous conclusion.

Mongols chiefly employed cavalry tactics to out-maneuver their opponents. The Mongol horse-riders were much lightly armored than their European or Middle-Eastern counterparts but that gave them an immense advantage on the battlefield, Mobility. Most Mongol warriors had more than one horse, which enabled them to switch their weary mounts with a fresh one. In addition, the Mongol mounts grew weary slowly due to less weight, and “Mongol Horse Archers” were the finest mounted archers of their time, who had perfected their craft of war with a deadly precision.

Often, Mongols would out-run their rivals, surround them with their superior maneuverability and then close in on their rivals along with infantry. Mongols seldom left survivors. 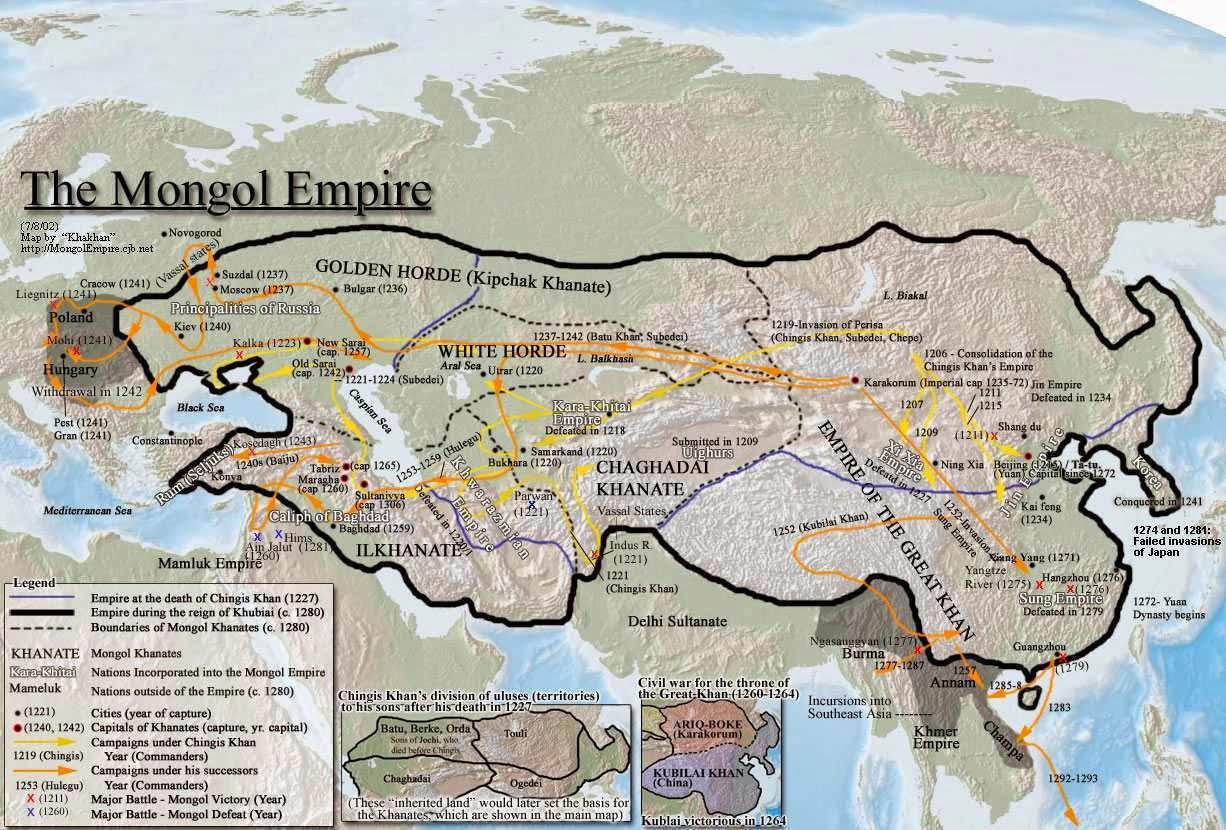 Mongols had a Patriarchal Society. Yet women were not deeply marginalized and sometimes certain wives of emperors has had a strong influence on government, arts and policy making!

The empire spanned from Korean Peninsula to Europe, and was home to many people of diverse cultures and traditions. As the silk route from land laid within the empire, many foreign merchants came to trade with the empire and doing so, many new cultures were introduced! As a result, many remnants of Buddhist temples, Churches and Persian architectural buildings survive even today!

Mongol Emperors promoted trade and supported native and foreign merchants with protection and even capital! These joint-ventures of empire-merchant were called “ortoq” (merchant partners) and were encouraged to trade afar in distant lands, in return, Imperial treasury would receive part of the profit, luxury goods and information!

Also, the economic and governing structures were supported with an effective and successful mail system for the time, called “Yam”. well-guarded relay posts (“Ortoo”) were set up throughout the empire typically at a distance of 25 miles each. A messenger could ride at least 120 miles a day and could switch to a fresh steed at every new post!

The Silk Route of the Mongols

Unfortunately, they were not always victorious in battle, politics and trade. The campaigns set out in the South, mainly against Burmese Kingdoms and Thailand inflicted heavy military and economic losses on the empire. The naval campaign set out against Japan ended in a total failure with much of the Mongol Navy being destroyed, and soldiers either killed or captured! Their empire was vast, and the bigger it got, thinner its forces spread out, making them vulnerable. Towards the later times of the empire, it was under attack from various foreign tribes and revolts.

Fall from the Grace: The End on an Era

With Genghis’ code of law, and modifications made by successive emperors, the empire was deeply ruptured by political divisions, new legal reforms, successor-battles and eventually the heaviest blow, a civil war. This ended with the massive empire being divided into 04 parts:

each following separate interests of their own and only staying united nominally.

Also, as the empire was vast and it borders stretched thousands of miles, and it became difficult for the military to protect its lands and to control local revolts.

The civil war and military expeditions drained the imperial treasury significantly. These wasted resources were extremely difficult to be replaced.

Epidemics spread among the population, both military and civilians. The lethal “Black Death” was originated in Mongol empire and then spread to Europe through merchants. The epidemic nearly killed 150 million people worldwide and one third of Europe’s population!

With the combined pressure of Civil war, Political instability, Epidemics, Famine and steady economic decline, the empire lost its territory and eventually collapsed. And by the end of the 15th century, Mongols were but a Shadow of their ancient glory, the Mongolian era was at the end. 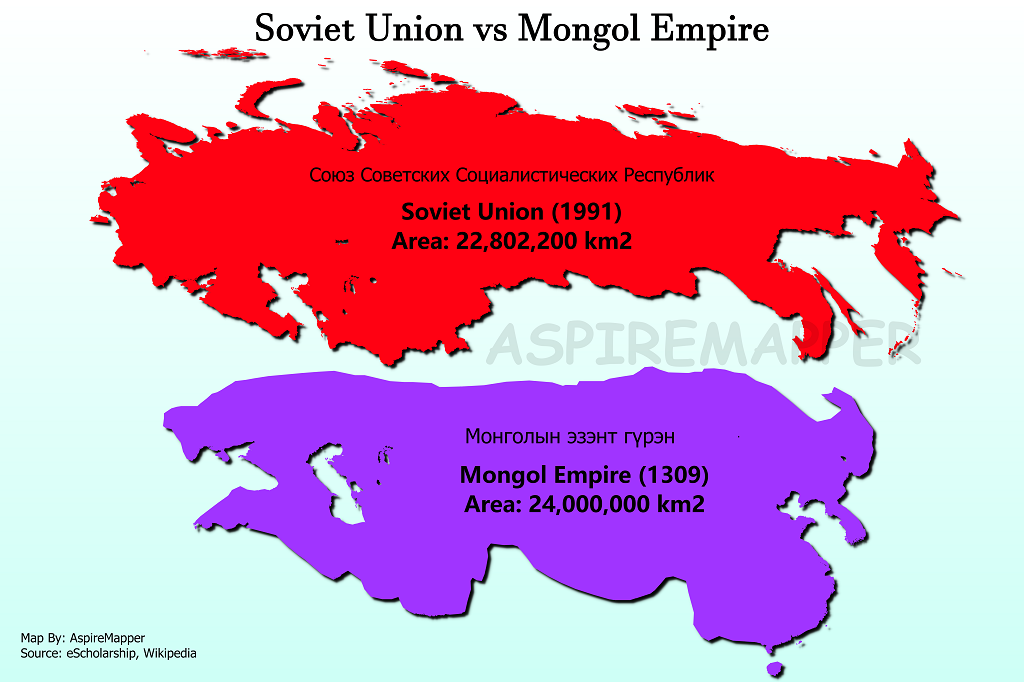